If you’ll permit me, I’m going to get sappy for a minute.  I had a lot of reasons that I wanted to hold the Groomsman Games.  The competition was as great, as expected.  The shit-talking was epic and endless (as you can tell from the recaps and the comments, we’ll get a lot of milage out of this).  However, the number one reason that I wanted to host the Games was the company.  These guys have been the best of friends and it didn’t feel quite right to shortchange any of them by simply elevating one and putting the rest underneath him.  Instead, the Games gave us an opportunity to share some really great times with some great friends and make memories that will last a lifetime.

Alright, that’s enough sap for one recap.  Below you will find the Groomsman Games recap in superlative form:

END_OF_DOCUMENT_TOKEN_TO_BE_REPLACED

When we first heard of the Man of the Year challenge we were impressed by the creator’s innovation and their implementation.  We loved the whole idea of the Man of the Year as well as several of their individual events.  One event piqued our interest more than the rest though: retaking the SATs.  Now, none of us will ever be confused with great minds like Einstein or Bill Nye but our group is collectively much smarter than we are athletic*.

*That’s damning with feint praise if I’ve ever heard it.

Two of our world’s greatest minds and my two favorite science guys.

END_OF_DOCUMENT_TOKEN_TO_BE_REPLACED 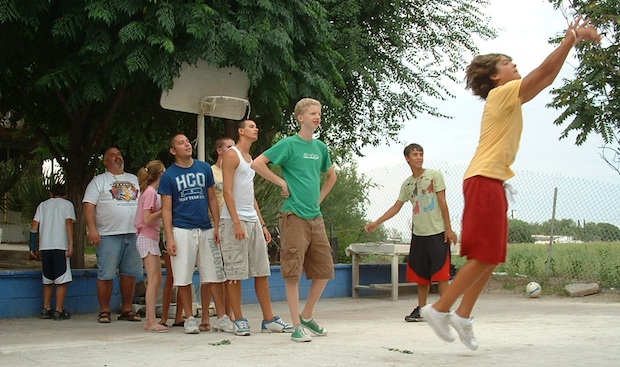 The second to last event of the Groomsman Games was mine (attn: foreshadowing) and I chose a playground game from our younger days – knockout.

I love knockout. I must have played it almost every day after elementary school at my daycare. I was good, too. I’ve been advocating for the NBA All-Star game to institute knockout for years. I played it any and every chance I had through the last year of gym: sophomore year of high school.

And then I stopped.

In fact I didn’t just stop playing knockout, I stopped touching basketballs all together until nine years later when the Groomsman Games came calling.

END_OF_DOCUMENT_TOKEN_TO_BE_REPLACED

You could call my fellow competitors in the GGs a lot of things; fabulously handsome, charming, brilliant, and hung, all come to mind but athletes they are not.  Rudy runs stupid amounts, mostly because that is a sport that requires zero hand eye coordination and you can become good at PURELY through relentless practice, but other than that the rest of the guys are pretty sedentary.  I happen to serve in the Armed Forces and am naturally a decent athlete, but compared to the rest of the crew I’m basically Jim Thorpe.  Thus, the simplest way that I saw to pickup a quick ten points was an all around physical competition.  In order to keep it interesting, make it fun, and harken back to our childhood I included some events I wasn’t totally sure I’d dominate.

I will say that despite the groups low level of fitness, there was absolutely no lack of heart.  Everyone showed up with their heads right and determined to maul each other in every event.  There were multiple dry heaves, some people who slightly tore ligaments trying to throw without warming up, and some blood left out on the field.  There were also some scarred families at the Park but I’d imagine that will be covered in event #9.

END_OF_DOCUMENT_TOKEN_TO_BE_REPLACED

In all of eternity, before homo sapiens walked upright, before Hercules battled the Minotaur, and after Rick Santorum pulled out of the 2012 election, it was written that Drunk Monopoly would have a champion.  Not just a champion, but a champion of champions.  It was written.  It was written well.  It was also spoken.  And passed down through the ages through stories.  It wasn’t physically written down, but more of in a figurative way.  So it was written.

The rules are simple: There are no rules.  Before you can even play, you must drink one full beer.  Rudy was made to drink two.  Let me also point out that the night prior to this, heavy drinking was had and heavy hangovers were in effect.  With a strict 11:00am start time, tempers flared as attempted manipulation occurred to begin the game without certain (Eli) participants in attendance.  All that aside, the game began smoothly, with the sweet taste of Natural Light tingling on our lips.

END_OF_DOCUMENT_TOKEN_TO_BE_REPLACED

With the Kentucky Derby and Drunk Food Derby out of the way, you’re likely clamoring for one more.  So we’ll let you have another: The Home Run Derby.

As Eli stated in the rules, we each got to pick one event ourselves. They were allowed to favor the creator heavily (this one did) but they had to have at  least a loose connection to the collective friendship of the group and Eli (we are all huge baseball fans).

The Event:
Contestants attempted to bat baseballs over a Little League field’s fence (approx. 180 feet).  A secondary boundary was marked in the outfield, which allowed additional points to be scored.

END_OF_DOCUMENT_TOKEN_TO_BE_REPLACED

Now, you may be thinking to yourself: “These groomsman games are the most egregious case of self indulgent, narcissistic broism that I’ve ever seen!”

I’d have trouble making an argument against that case.  The Groomsman games are, without a doubt, a case of bro-love taken way too far (not to be confused with other instances of bro love going too far).  Well, I figure if we’re going to bro it out, there’s one event we can’t avoid: a beer pong tournament.

Is there anything more legendary than a beer pong tournament? … probably, but it sounds like fun so lets do it anyways…

END_OF_DOCUMENT_TOKEN_TO_BE_REPLACED

When we were growing up, Eli drove us everywhere. Cliff still lived abroad, McCannon was too lazy and too stupid to pass his permit test before Virginia bumped up the age minimum, Bart was a a loser, I didn’t really know Al that well yet, and I was way younger than everyone else. So we’d pile into Eli’s creepy white Plymouth Voyager (literally held together with duct tape) and roam the hard streets of Northern Virginia trying to convince people we weren’t the DC Snipers. As time went on, our group posted a car collection that would make Jay Leno blush: There was McCannon’s iconic ’95 Corolla known simply as ACE, Bart’s ’92 Tercel (that had a huge dent in the side of it from where I kicked it while drunk and later convinced him that he must have been victim of a hit and run), Eli’s upgrade to the ’94 Accord that leaked fluid onto the feet of whoever rode shotgun, and Clifford’s Ranger pick-up truck which once hit 100 mph in a residential neighborhood.

We may have been driving ticking time bombs and playing jeopardy with our lives each time Eli stalled out in the middle of an intersection, but one thing we never did was drive under the influence. Even if it meant that we’d end the night with nothing in our stomachs but the poisons of C2H6O. Every now and then, we’d summon our designated designated driver to bring us to the hellhole that is Amphora Diner in Herndon. But rarely would one of us bite the bullet to stay sober so that our friends could raise hell in a public venue at 3:00AM. So what would it be like to race around DC to our favorite late night eateries? And what would the food taste like without the aid of a couple cold ones? LET THE GREAT EXPERIMENT BEGIN!

END_OF_DOCUMENT_TOKEN_TO_BE_REPLACED

My first house out of college was far from perfect.  Mistake number one was agreeing to live with  Bart, McCannon, and Rudy.  That poor decision speaks for itself.   Mistake number two was agreeing to live with a girl*.  We had plenty of other issues, not the least of which was our completely useless central heating and cooling system and our insane next door neighbor**.  The house did offer one crucial characteristic that was 99% of the reason for us moving in: Location.  Our house was smack in the middle of Arlington, VA – at the time, considered the best place in America to be rich and single – and less than half a mile from O’Sullivan’s Irish Pub.

We always want to go where everybody knows our names…

END_OF_DOCUMENT_TOKEN_TO_BE_REPLACED

My gambling habit started at an early age.  My mother used poker as a way to teach me about statistics and probability when I was in elementary school.  I grew up watching great movies like The Sting and Maverick where poker was shown as a game of skill and a way of life.  Not much changed when we started congregating at Mac’s house.  We started out playing mostly 5 card draw, 7 card stud, and a 3 card draw that we learned from Lock Stock and 2 Smoking Barrels.  Of course, it wasn’t long before we learned that the World Series of Poker played Texas hold ‘em and we saw Rounders for the first time.  What had started as a way to pass the time and engage our overactive competitive sides turned into a part of our daily lives, no different than brushing our teeth or doing our homework*.

*Scratch that, I definitely played way more poker than I did homework.
END_OF_DOCUMENT_TOKEN_TO_BE_REPLACED